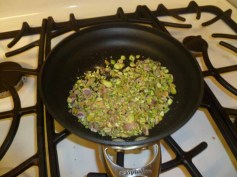 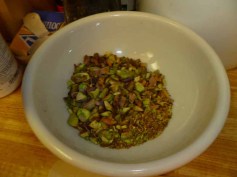 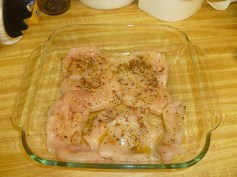 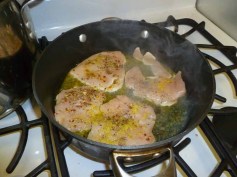 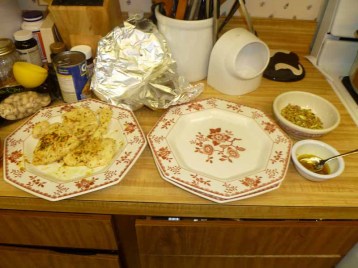 Unlike the Vegetable Stir-Fry I made the day before, I LOVED how the Lemon-Pistachio Chicken turned out from the same healthy Betty Crocker cookbook. The recipe was really basic (and can be found on page 242 of that book), but also turned out really tasty if you like lemon chicken. I started off shelling the pistachios. I probably should have gotten unsalted ones, but didn’t think about it. Besides, I really like salted pistachios, so I got to eat the rest of the bag. I gave the shelled nuts a chop, but wish I would have gone finer with it before toasting them. I’m slowly figuring out how to toast nuts and have realized an important step is removing whatever you’re toasting from the pan immediately so they don’t burn. I took them out and gave them another chop.

While the pistachios toasted, I zested two lemons and then squeezed the juice of both into the same bowl. The recipes suggested pounding the chicken out and then just cooking them right away in the pan, but I marinated them in the lemon juice, olive oil and lemon pepper (which we picked up from Marshall’s a while back). After that was in the fridge, I cut the broccoli off the stems and got the pot ready for steaming.

I got all this done ahead of time. With the chicken being pounded, I knew that it would cook pretty quickly, so I waited for a while to start actually cooking. When my wife was close to home, I fired up the burner, got my pan heated up, poured a bit of olive oil in there and then cooked those bad boys. It wound up being only a few minutes on either side. The recipe called for serving the juice from the marinade that also boiled in the pan along with the chicken, which I did, but only after letting it cook a little longer in the pan at a boil.

Serving was pretty simple. Basically you just put some of the juice–which wound up being a little too olive oily thanks to the extra I put in the marinade–on the chicken and then place the toasted pistachio bits on top. Good to go! I am a huge, huge fan of sour flavors, always have been, so this meal was completely in my wheel house. I didn’t measure how much lemon zest or juice I put in, but using two lemons wound up being just the right amount. The pistachios added a nice crunch, that sweet/salty flavor and a toasty flavor to the sourness, making for a nice balance. I will absolutely be cooking this meal again.