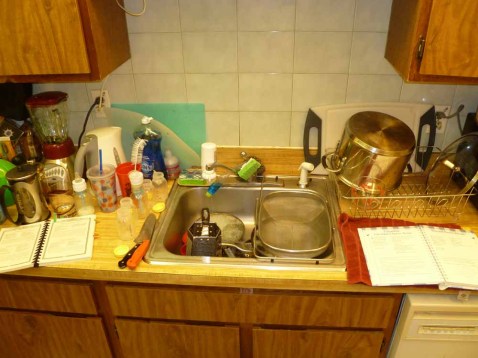 Not one, but TWO cookbooks 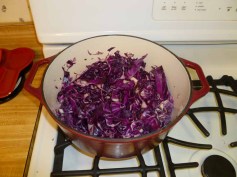 Tuesday night’s dinner was an interesting one. I had spent a part of the day flipping through cookbooks to find some good, fun and new recipes for the week. I turned to a few books I haven’t gone through in a while like Best Of The Best From New York Cookbook and Cooking With Mickey And The Disney Chefs among others. I wasn’t looking for anything in particular, but I stumbled upon the recipe for Pasta Godjabuda in the New York book (page 109) and happened to have everything I’d need already in my kitchen. As I was planning on cooking that, I realized I still had half a head of red cabbage left over that still looked good and remembered I had seen a recipe for Braised Red Cabbage in the Disney book (page 9). Again, I happened to have all the ingredients, so I was good to go. My only concern was whether braised cabbage would go well with pasta as it’s kind of a mix of German and Italian.

The first thing I did (but didn’t bother taking a picture of because it’s boring) was boil some salted water pasta and get that going. After that, I got to work on the cabbage because it was supposed to cook for 35-40 minutes. The recipe basically calls for mixing some white vinegar, sugar, salt, caraway seeds and ground cloves in a pot with chopped up cabbage and cooking with the lid on. I didn’t have a full head of cabbage like the recipe calls for so I didn’t use quite as much of any of the ingredients as it called for. No worries, though, it turned out great.

While the cabbage boiled away, I got to work on the sauteed onions and garlic, which involved chopping the onions (I only had a dinky one instead of the two they recipe called for) and garlic in olive oil and then tossing in some oregano, thyme, basil and cayenne pepper (I skipped the crushed red because I didn’t want it to get too hot). You put a lid on that while the pasta cooks in the pasta water (about 10 minutes or so), then uncover and toss with the pasta after draining and reserving some pasta water. The recipe suggests using part of the onion sauce to mix and then adding it on top when you serve, but I just mixed it all together. Add some Parm and you’re good to go.

I was pleasantly surprised that these seemingly disparate tastes wound up bouncing off of each other really well. The cabbage tasted like the sauerkraut from every good Reuben I’ve ever had. As I bit into it I could practically taste the rye bread and corn beef, it was that dead-on. I was shocked that I made something so tasty so easily. The pasta itself wasn’t packed with flavor, but I think that’s a result of not having the correct amount of onions and using a wheat pasta which always has a little bit of a mealy taste to me. I tried to balance that out by adding a few more fresh herbs into the mix and I think that helped. At the end of the day, the cabbage added a nice tastebud combo punch. My wife liked it so much she wanted me to store the leftovers together in the fridge, but I decided against it because I didn’t want the cabbage to overpower things while sitting in the refrigerator.

I love when a meal comes together, especially one that uses up a bunch of stuff I’ve had lying around for a while. Now I want a Reuben…