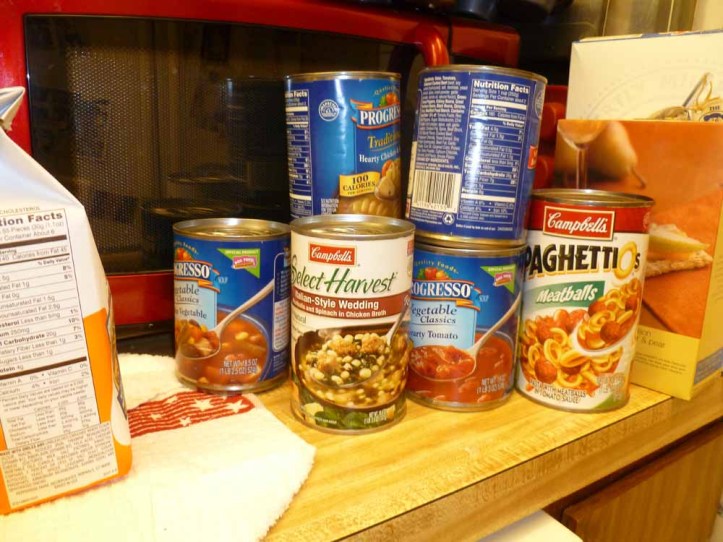 I tend not to take news reports about weather too seriously. Heck, I rarely pay attention to the weather at all past looking out to see if it’s raining. So, I hadn’t heard about Hurricane Irene before Thursday of last week. My wife mentioned it to me. For some reason, when she said “hurricane” I heard “tornado.” After a beat or two, I was like “Wait, aren’t hurricanes just big rain storms?” She looked at me like I was slow, which I was being at the time, and we went on with our evening. To defend myself just for a moment, I’m from a place in Ohio where tornadoes are the norm. We don’t have hurricanes. I don’t know earthquakes, but I can automatically prep for a tornado after years of drills in grade school. Always make sure to have your English book with you, by the way. 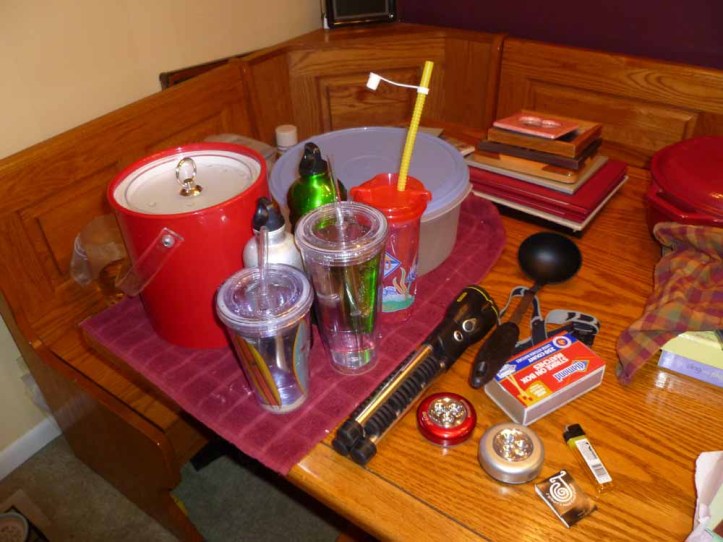 When I ran to the store on Thursday, my wife had me pick up some canned soup, so that was the first prep step. By Friday, people out of state were asking me about Irene and I didn’t really have any answers, so I turned the news on. I will say right away that watching the news all day–which wound up being two to three days–is a huge mistake. I recommend taking a break to watch a movie or some TV episodes. You will either get ridiculously over-worried or maddened by the awful repetition of segments and scenes shown over and over and over. I’d also recommend mixing up the stations you’re watching. We wound up on NBC for the better part of the weekend and by Sunday night my wife and I were both a bit punchy. “Why are they showing that stupid wedding clip again?!” and “Why won’t they let that guy out of the rain, already?!” were spouted out more than once by my wife and me.

Saturday wound up being prep day as the storm moved its way north. I’ll be honest, if I was just a single dude on my own, I’d probably get a few bottles of water, a lighter, a 24 pack of Coors Light and four or five 2 liters of soda. As I am married and have a kid, there was a lot more to do. We filled everything we could find up with water including a big circular plastic tub, an ice bucket and even a 2 liter I had just polished off. My wife wasn’t super happy with some of those, but I didn’t want to buy a ton of pitchers that we might never need again. They all hold water, what’s the difference? I also filled three pots and a tea pot with water and put them on the stove. I put the canned food across from the stove along with the can opener. Finally, I gathered all the light-casting things I could find from those button light discs you stick on walls and lighters to headlamps and matches. I felt pretty prepared. We thought about filling the tub with water in case we needed it for flushing the toilet, but didn’t get around to it. Thankfully we didn’t wind up needing any of that stuff.

We were lucky. We weren’t in one of the danger zones. For those of you who don’t know, we live about an hour north and on the other side of the Hudson River from New York City. I was pretty sure that our area with it’s nearness to mountains and fairly high elevation would be good as far as flooding went, but there isn’t much you could do against the wind. We were one of the few people in our U-shaped condo courtyard to remove our pots from the patio. I made a mental note of each one and who they belonged to, so I could cause some trouble if one of them went through our window. That was my real concern, something going through the window. Not only would that be dangerous, but it would lead to even more headaches that I really want to deal with right now.

Saturday night it got a little scary. It had been pretty dark all day as you can see in this pre-storm pic that we mentally titled “Baby’s First Hurricane.” As the darkness increased, so did the wind and the rain. It was intermittent for a while there, but the rain was pretty intense. At this point, our main concerns were the aforementioned window smashes–though the wind didn’t seem to get that powerful–and the potential for flooding in our building’s storage area. My wife went to bed–we switched sides so that I was sleeping near the window while here and the baby were on the other side–but I stayed up. It wasn’t terrible, but you never know when that one tree branch might snap loose or that jerk behind me who refused to clear off his patio’s flower pot and I’ve got glass all over me. 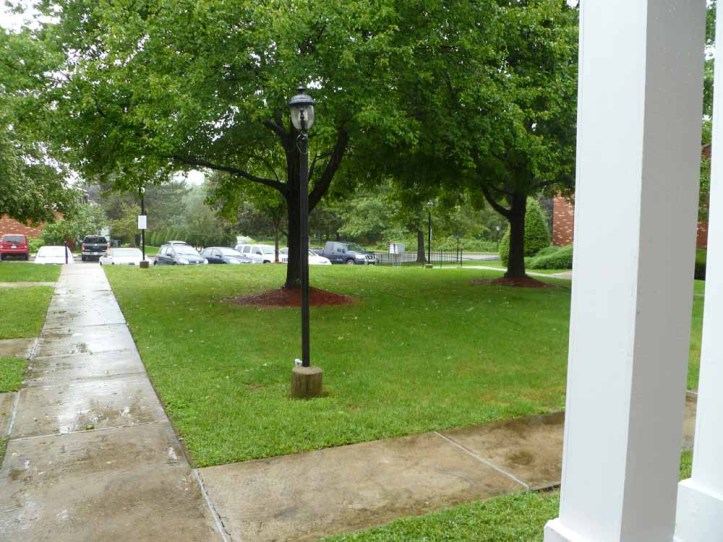 It wasn’t exactly a peaceful night. I move around a lot in my sleep and I didn’t want to fall off the bed. Plus, around 3 or 4AM the wind aimed itself directly at our window along with pelting rain. Visions of shattering glass danced in my head, but luckily stayed there. Sunday morning was kind of eerie. It was still dark and there were a lot more leaves on the ground, but overall it didn’t look that different. Aside from the standing water in the courtyard. When the rain stopped, I went over to check the storage area and, of course, there were four or five inches of water outside the door. I couldn’t tell if water was inside the storage area itself, but investigating later showed me that there was in fact quite a bit of water in there. I haven’t actually ventured inside yet, but I’m hoping the pallets on the floor and shifting some things along kept everything mostly dry. 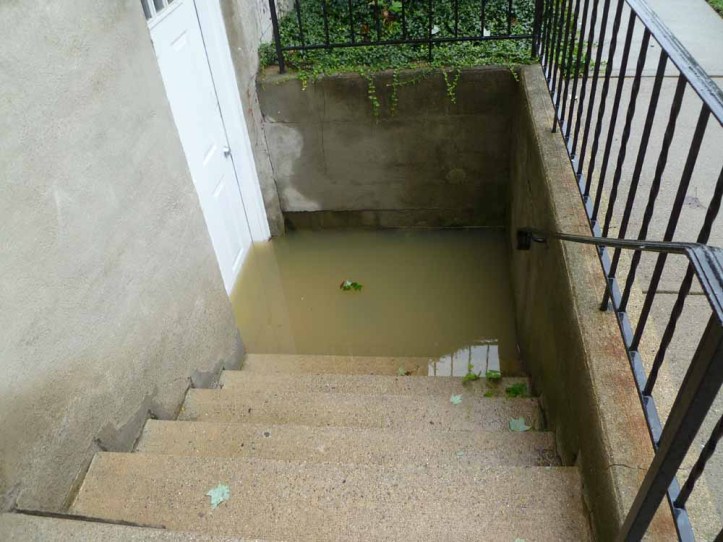 But, like I said, we’re lucky. I have friends whose finished basements were flooded and others whose entire backyard disappeared in a lake of brown water. All we lost was a weekend and maybe a little sanity. After all that news coverage and being cooped up in the house all weekend, my wife and I were a little punchy. Ah well, at least we were safe. I also want to say that people who are mad or disappointed that the storm wasn’t worse. I can understand this mentality to a certain extent. The news made a really big deal about all this for a very long time. Some people had to be evacuated. But, look. Think about it from the opposite side. What if everyone just laid back and didn’t do anything? What if the storm had been worse? What if it hadn’t taken that turn out to sea instead of moving further inland? I’d rather be inconvenienced than dead every day of the week. 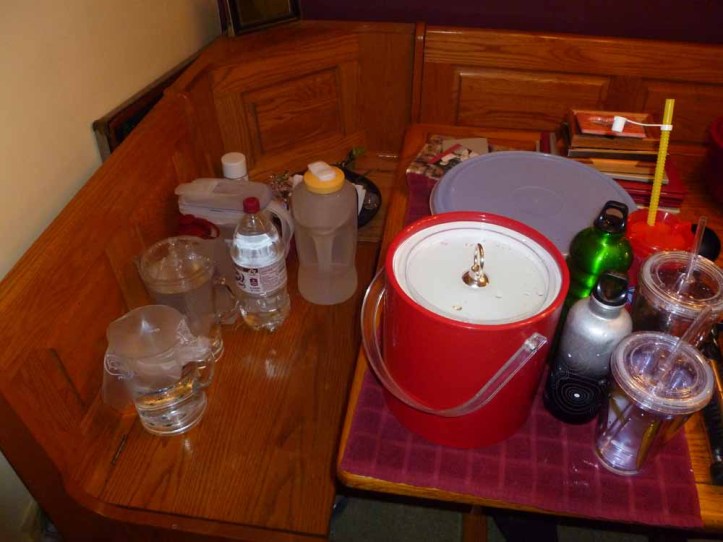 Now, who’s going to help me eat all this soup and drink all this water?