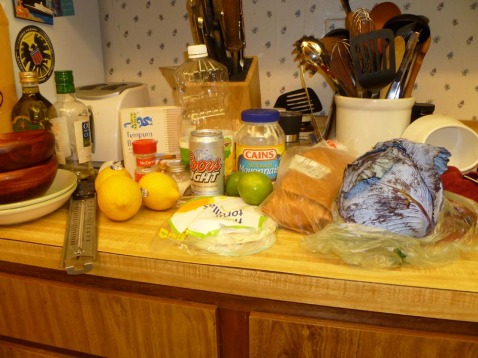 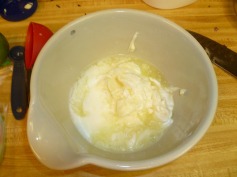 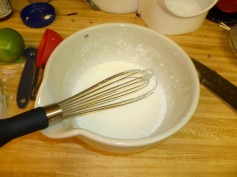 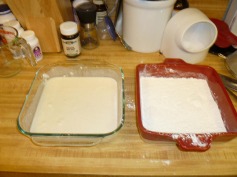 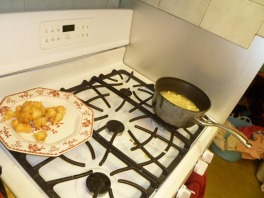 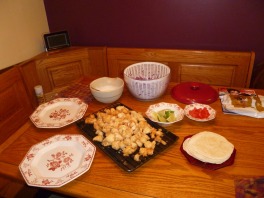 Last night I made Baja Fish Tacos using the Fisherman’s Market and Grill recipe posted on Food Network. I took step by step pictures as you can see above, but also wanted to add my two cents. Ingredients wise, I stuck to the recipe. For beer I used a Coors Light, I picked up some purple cabbage and went with cod for the fish. As always, I got all my non perishable ingredients together ahead of time. As I’m working in a pretty small kitchen, I scattered the ingredients around after taking that first picture. First up, I cut up the cabbage. I wound up using probably a third of the head, then gave it a spray and a whirl in the salad spinner. With that done, I moved on to put together the white sauce. I used what was left of the mayo in our refrigerator which might not have been a full cup and just whisked it all together. My wife said it tasted too much like mayonnaise, but I dug the tanginess brought out by the lemon. I popped that in the fridge and then moved on to the tempura batter. As the recipe says, I took one package and made it with water and beer in a baking dish, then poured the other one in another baking dish along with the salt and garlic powder. I moved those two containers to the side, started heating up some canola oil in a sauce pan with a candy thermometer to watch the temp. Meanwhile, I cut up the cod into small pieces. Of course, in the middle of all this, my daughter started hollering so I had to take a break to give her a bottle.

She fell asleep pretty soon and I got back to cutting. I wound up getting 1.75 pounds of fish which made a pretty big pile of cod bits. Once the oil got up to the right temp–I aimed for about 375 degrees–I started the process of dipping fish chunks in the wet dredge then into the dry tempura and dropping some in the pan with the oil letting it fry for a few minutes before moving it to a plate. I used a slotted claw spoon to fish the pieces out which worked out well. When she got home, my wife suggested I put it on a rack over an oven pan to keep the excess oil off the bottom pieces of fish. That’s a good call. This was the first time I ever fried anything. I was surprised at how easy it was. I would have used more oil and maybe a bigger pan, but I didn’t have a ton of oil and worked with what I had. Even though my fish-dunking hand turned into a huge clump of drying tempura, it all turned out great. I put the fish, white sauce, tortillas, lime slices, cabbage and some diced tommato (because I had one lying around left over from the other day) all on the table and it made a wonderfully colorful spread. My wife went down to our herb garden and grabbed some Thai basil which was a good addition.

Overall, I LOVED this dish. Man oh man, was the fried fish tasty. That batter is money. All the ingredients worked great together with the sourness of lime bouncing off the tangy white sauce and the ultra flavorful, kinda salty fried fish. We also had some hot sauce around and even though the recipe didn’t call for tomatoes, they were a great addition. I think I wound up eating five of these fantastic tacos. There were a few negatives though. All that frying stunk the house up pretty bad. Also, I wound up with a mountain of dishes I then had to clean. Ah well, I figured it was worth it because the dinner was just so damn good. This recipe will definitely become a regular fixture on my family menu!